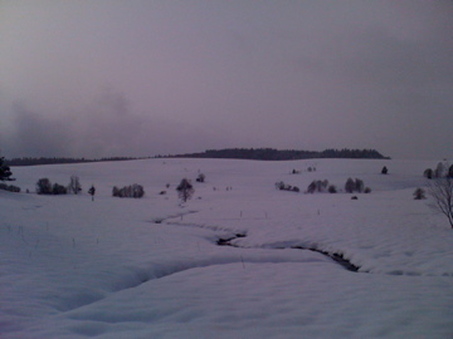 Through the Songs
A Twelve Week Journey With Schubert's Winterreise
Week Three: Frauenreise?

It is the nature of these questions that they are, to some degree, unanswerable.  Perhaps that is how Schubert’s Winterreise can remain so open to interpretation after almost two hundred years of scrutiny.  Hopefully, over the course of the coming weeks we will address all of them, if not decidedly. Of all the unanswered questions about the nature of spiritual journeys in general and this piece in particular, this week Catherine and are wondering the following: is such a journeyer male, or female?  And how does the journey differ for a “he” or a “she?”

Last night, I went through some of the songs with another pianist here in Berlin, as Catherine is in California. Byron Knudsen is on the musical staff of the Komische Oper here and is someone I usually work on operatic repertoire with.   I think we both enjoyed changing gears to look at these songs.  During that rehearsal, I did a complete 180 on my opinion of tempo for the first piece.  I had heard a very fast version of it when Catherine and I were first discussing it.  It was actually a version sung by my teacher, the late Dickson Titus.  I enjoyed it very much and liked the youthful, masculine energy of it. But Catherine and I ended up liking a slower tempo, closer to that of Dietrich Fischer-Dieskau’s early recording which, by my CD player’s reading, adds over a minute to Dickson’s time. I am sure these things will sort themselves out, and also that the interpretations we discuss in this blog weekly will, by journey’s end, be somewhat obsolete if not entirely moot. But the difference of character in the two versions brought up one single issue that has been on my mind since we began this project:  gender. Speeding up the tempo made the person’s choice to leave seem more urgent and decisive, the character a bit more aggressive, and somehow more masculine.

In the poems, as in most renditions over the past two hundred years, the journeyer is male.  He or, in German, “Er” sets out on this path.  We won’t call it “quest” just as we won’t call him a “hero,” since we cannot be sure that he is up to anything heroic nor that he is searching for anything in particular.   Leaving these issues open, why then should we even be concerned about, much less dwell on whether or not we are conceiving of the character as male or female?  We will answer this with a repetition of the first line written for this blog: “No performance of any work, whether new or old, stands abstracted from the people bringing it to life.” Catherine and I are women.  I am not sure I am comfortable defining my position on a scale of femininity, but I hope Catherine won’t mind my saying, that she isultra feminine.  She has long, beautiful hair, a very, very high speaking voice and a tendency, as do I, to wear long flowing skirts. Not only that, we have even observed that when we are spending lots of time together, we tend to color coordinate our long flowing skirts, without ever discussing it. In other words, if we are not careful, this may be the girly-est Winterreise on record.  And before we get too worried about tacking north to compensate for a southerly wind, we thought we should ask: “would that be such a bad thing?”

Early in our work yesterday,  Byron asked me what role I thought the emotion of anger played in this piece.  I immediately felt guilty of overlooking the obvious in a way that I am, perhaps by gender, acculturated to do.  Strong emotions almost always go through a cultural filtering process before being released, and while it may be a cliché, it is also largely true that in the culture I grew up in, among women the emotion of anger is less accepted.  Among men, the emotion of sadness is less accepted.  It follows then, that in a similar situation, like the one of lost love portrayed in this cycle, a male protagonist may respond more with anger and a female protagonist more with sadness.  If Catherine and I are to be true to the music as written, we will need to make sure that we are not missing tones of emotion simply because we are, ourselves, less comfortable expressing them.  When Byron mentioned anger to me, it was like when someone tells you not to think of the color yellow.  You will suddenly see it everywhere.  I hadn’t been thinking much about it, but on reflection, there is no question that the protagonist in this cycle is, at times, quite pissed off.  So yes, I think, a too feminine version of the piece might miss something elemental. We also may discover that our collaboration reveals or deepens other elements sometimes overlooked.  Mantra of the day:  we shall see.  We shall see.  We shall see.

The question of how, why and when this piece has been or should be done by a woman singer is also interesting.  Historically, as far as I can tell, it was not the fashion for it to be done much by women until some time in the latter part of the last century, notably, Brigitte Fassbaender and Christa Ludwig have sung and recorded it to acclaim. Before that, German soprano Lotte Lehman not only sang it and wrote about its interpretation, but drew some very interesting and beautiful illustrations as well.  So, it certainly can, and has been done by a woman, though as far as my research has gone, not by a woman singer and a woman pianist. Schubert was not opposed to transposition for other voice types, though he wrote the cycle originally for tenor.  (I have not been able to find anything on how he felt about a woman singing them, and would appreciate any citations that people can offer on this topic.)

My own personal agenda with the piece has another layer to it, which is that just this year I changed my vocal Fach, or category, from mezzo soprano to soprano.  Therefore, I am trying my hand at Lieder with my “new” voice.  It is imperative for me at this stage of the transition to absolutely leave behind old habits- let’s call them “mezzifciations”- of darkening the tone or adding weight in the middle voice.  I’m not suggesting that true mezzos do this, but perhaps only a soprano trapped inside a mezzo’s body.  For that reason, I am endeavoring to let the sound itself be that which I am cultivating and refining in general these days, that of a soprano, a brighter, higher, more feminine sound.  That will undoubtedly affect the palette from which I have to draw this character.  It is a particular pleasure for me that because of this change, I can now do these songs in the keys that Schubert wrote them.

In our discussions of the piece so far, Catherine and I have enjoyed not exactly consensus, but a kind of mutual interest in one another’s perspectives with a generous dose of “well, we’ll see how it ends up being in the end.” But when discussing this song, Catherine and I came as close as we have to actively disagreeing about the mood of a song, that is until we realized that we were looking at two different songs.  She was looking primarily at the accompaniment and I was looking primarily at the vocal line.  From those vantages, there are two different songs here.  The accompaniment is syncopated.  The vocal part is relentlessly on the beat.  The accompaniment seems suspenseful.  The vocal part seems to me predetermined, forging ahead despite the fact that the narrator is reluctant, almost unable to face what is happening to him.  Based on our earlier conversation about gender, I could add here: or what is happening to her.  But in this song, there is no need.  In this poem, there is no he or she.  Speaking in the first person, the person sings “I” and sings directly to the tears that are falling unknowingly.  It is almost as if this person is speaking unknowingly, simply cataloguing this confusing, painful period of heartbreak.  How can it be that the tears are so cold and freeze to ice, and yet the heart is so burning hot?  It is as if the pain is of such quantity, and such variety, that the person experiencing it cannot even really register that it is happening.  “Frozen drops falling down from my cheek.  How could it have escaped me that I was crying?”  But the accompaniment is less confused.  It is stark, off-putting, but consistent.  Perhaps later in the cycle, the pain will be experienced more fully, more immediately, but for now, it seems to us that this person is skating on the surface of reality, still wondering if it is really so.  Still asking in tremendous pain:  How can this be?  How can this be?

Here, Catherine and I agreed on the literal meaning of the song, but less so on the implications.  For my part, I read this poem as a last gasp of denial, the penultimate refusal to listen to the pain of the heart before sinking into the grief completely.  If, as we discussed last week, Die Nebensonnen is the longing for darkness and death, and Der Leiermann is a full letting go of looking for peace in material reality, then Mut is the surge of energy that the egoic mind experiences just before it is extinguished, refusing to listen to the heart, even deriding its “complaining.”  “Complaining is for fools!”  To me, the title was sarcastic.  Courage, indeed.  I even wondered if Müller was particularly harsh on this sort of rebellious anti-emotionalism based on his own experience of regret for earlier times when he volunteered as a soldier in the Prussian army against Napoleon.  Is it truly courageous to push away the laments of your heart?  I didn’t think so.  Then, Catherine shared her thoughts.  As we mentioned in the first week, Catherine is in California for the next month, caring for a loved one who is seriously ill.  Her reading of this song was deeply influenced by aspects of courage she is witnessing as this person faces illness.  She said that she has seen sparks of joy, laughter and sheer joie de vivre that have surprised and pleased her.  She feels she is seeing a natural emergence of the life force, the will to live!  Hearing this,  my analysis seemed too abstract and judgmental of this character, who drowns out the cries of his heart by singing “loudly and gaily.”  It reminded me that when facing adversity, we don’t open a spiritual textbook and do the “enlightened” thing.  We do the best we can.  We do what we need to do to get through to the next phase of our journey.