Through the Songs
A Twelve Week Journey With Schubert's Winterreise
Week Four: Numbness & The Inn 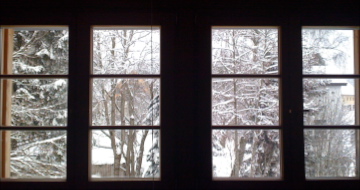 I am becoming increasingly skeptical of these song titles.  Last week, I shared that I found the philosophy expressed in “Mut!” less courageous than the title might suggest, and this week, I am finding “Erstarrung” or “Numbness” to be not at all frozen but rather, boiling hot and full of passion.   I don’t know yet what Catherine thinks about it.  She will email me her thoughts in a bit.  I wish she were here to discuss it, but also that she were here to go with me to KDW for a potato pancake to cheer me up.  Yesterday, I had a rough day here in Berlin and am still licking my wounds.  I auditioned for an agent here, and while he found my high notes “strahlende” and “stark” (radiant and strong) he did not like my middle voice one bit and felt the need to say so, repeatedly.  These things are par for the course, I suppose, in pursuing an opera career, but they still have a way of making me feel that I have been kicked in the stomach, even if I am left without any actual evidence that the person’s boot has come anywhere near my belt buckle.  In situations like these, Catherine is a wonderful person to talk to.  She has a way of empathizing with and supporting the utter fragility and sensitivity of being an artist, while simultaneously encouraging you to forge ahead.  That is, in part, the theme this week, “forging ahead,” as we will see in “The Inn.”  From the beginning of this process, Catherine and I have both taken personal guidance and inspiration from these songs, enjoying the way the themes and messages seam to bleed through between life and music, and back through to music and life.    Whether the poems are the backdrop for our lives, or our lives are the backdrop for the poems, I don't know, but I am especially drawing comfort from such interplay  this week.

To Catherine, this song is a song of loss that can be felt differently by the listener depending on what sort of loss they are suffering from (love, health, etc.)  She thinks for Schubert and Müller, it may have expressed a sense of lost hope.  Hope had arisen in Europe after the French revolution.  It was hope for a voice, the hope of coming out from under cruel, autocratic rule, the hope for democracy and a better life.  All this was brutally quashed under the dictatorial policies of Klemens von Metternich, who had established a police state in which distrust was rampant and artists especially suffered under censorship.  (Catherine points out that on the subject of generations of oppression, the name- Klemens Lothar Graf von Metternich-Winneburg zu Meilstein-says it all!)   To me, the song is a desperate fear of loss, a panic almost.  The person is just beginning to piece together the magnitude of the situation and a certain kind of horrible realization is taking place.  The fast, furious music is rushing ahead as he searches in vain for the footsteps of his beloved, for some trace of the love they had.  If all is frozen now, including his love’s image inside his heart, then what will happen when it melts?  It is already winter.  The flowers are dead.  There will be no memento for him.  Even worse than the pain he is in, he is afraid that when the pain ends, all traces of his love will have been obliterated just as the snow covers the footsteps where the two walked together.

This song really surprises me.  The way it begins, the piano is so lovely, and so simple. When I hear it, it makes me think of home and, being American, it takes my imagination there, to American song of the period.  It feels hymnlike, or even like a folk melody, something comforting to be sung in a parlor as the family listens.  That is why the end surprises me, and is so heartbreaking.  The portrait of the weary traveler is so sympathetic that I think: surely he will be taken in.  This will be a story of generosity, or even good will.  His suffering and injury are so tenderly, so empathetically depicted, how could they refuse him?  But when the accompaniment responds gloomily to his cry that he is “tödlich schwer verletzt” (perishing, seriously wounded) there can be no doubt that there is a harder ending in store.  This is where it touches my heart and I let myself feel the sadness of this week. It may seem an inflation of my own circumstance to compare the suffering and challenges this character confronts with those of being an unemployed opera singer, but I think that is what great works of music and theater (and this is both) do.  They somehow give us permission to come into greater contact with the reality of our own situations.  Sometimes this is done through an exaggeration, showing a situation more dramatic than our own, as when this character, injured and tired is turned away at the Inn, and sometimes it is achieved through the detailed sensitivity of a simple emotion that we have all experienced, as when he contemplates in “Erstarrung” what the loss of love feels like.  I know there are many worse, sadder, more painful things in the world than being an unemployed singer, and I am certainly not “tödlich schwer verletzt.”  But I am tired.  I am tired of auditioning and being told there is no room at the inn, or worse.  It is an unrequited love, of a sort, and it hurts.  So what can I say to myself now?  What would Catherine say if she were here?  What do we say when there is nothing to do but to get through a tough time?  What does the wanderer say when the “merciless” inn turns him away?  “Nun weiter denn, nun weiter.”  Now onward then, now onward.

Postscript:  There is something that happens, being here in Germany, when I meet someone of an older generation.  If I meet someone who is obviously old enough to have lived through World War II, I immediately want to know what it was like for him or her.  What did they do, experience, and feel?  I met such a person this week.  After the audition, I went out with my friend Rebecca, another singer who had auditioned that day.  We had a great time relaxing over wine and good food, debriefing about how we thought we had done, what the agent had said to each of us, and just generally toasting the day.  Towards the end of our meal, an older gentleman came and sat next to us.  We ended up talking with him and his friend for sometime.  He is a photographer, and his beautiful black and white still life photographs hung on the wall of the café.  As it turns out, he is an enormous opera fan.  He serenaded us with several strains of Rigoletto and Otello in a strong tenor voice and we enjoyed discussing his favorite singers with him.  He gave us his card so that we could attend a showing of his photographs and we have since learned more about him, including that his family fled Germany in 1939 to live in Palestine and then Israel until 1957.  Some of my initial curiosity about him is satisfied but not  all, so  I will use my imagination, and Müller’s poem, to contemplate this man’s life and fill in the rest.  What must it have been like for him, being a Jewish child in Germany in the 1930’s?  What must it have been like to return to Berlin, a place he obviously loves and captures in stunning pictures?  What is it that keeps him going at the age of seventy-eight so that, of a Tuesday evening, he is out and about enjoying life?  What are the various times and places in his life when he must have said simply:  “Nun weiter denn, nun weiter?”