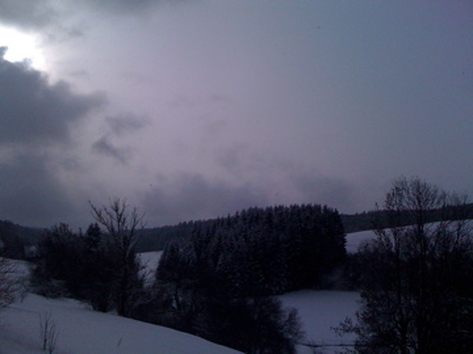 Through the Songs
A Twelve Week Journey With Schubert's Winterreise
Week Ten: Somewhere Along the Way


“My feet did not ask for rest.  It was too cold to stand still.
My back felt no burden, the storm pushed me forward.”

“Accepting hardship as the pathway to peace.”

The Serenity Prayer by Reinhold Niebuhr

Not to put too fine a point on it, but none of us knows how long we’re here for.  It seems about time for us to look at Schubert’s traveler, or rather, Müller’s traveler, or as he’s coming more and more to seem, our traveler, and ask, how long is his journey?  Since we have been looking at the songs from first and last and working our way inward, we might assume that there is a strong, precise throughline to this story that has been obscured from our view, but we don’t think so.  Even taken in order, there are simply too many tosses and turns in his state of mind to show a steady progression in one direction or another.  Just as he seems to be forgetting his heartbreak and accepting his fate, we find him ranting and raving about the harshness of his circumstance.  One minute, he is standing, musing at a falling leaf, the next he is on death’s door.  But are these really minutes we are talking about?  Or are they days?  Years?  Lifetimes?  And what is the difference between this minute and your whole life?  How many times a day do we all forget that we are only here for a little while?  How many times a day to we act as if we have all the time in the world?  The truth is, we really don’t know.  And when we take difficult times as somehow a problem to be overcome, as an irritating intrusion into our world, or even as times that somehow don’t count on the scoreboard of life, we are making our time here even shorter.  This cycle is nothing if not an homage, a deep bow to those tough times.

Perhaps it is because we are both so steeped in our traveler’s acceptance of the harsher sides of life that Catherine and I are not averse, at the moment, to some difficulty we are having. This week, we are not getting along.  That sentence looks pretty stark on the page, and seems immediately an overstatement, but in moments, many moments, it has been true.  We have been irritated with and bothered by one another in ways we never have been previously.  I think it has prompted both of us to wonder whether or not this wonderful friendship, which came into being so quickly and easily, might fall apart just as fast and with as little fuss.  Being in the middle of it, it’s been painful for both of us.  But besides having faith in each other as musicians, which we do, we both feel strongly that times like these come along to teach us something, and not just anything.  They come along to teach us precisely what it is that we need to learn.  But even knowing that, even looking for that insight, we won’t tell you this week exactly what that is.  We’re not being stingy or secretive.  We just really don’t know.  We don’t know because we’re too much in the middle of it to see the whole picture.  Or maybe we’re not even in the middle yet, or maybe we already passed the middle.  The truth is, we don’t know where we are on this journey.  Our concert is Sunday, December 4.  The last blog will be the following Friday.  We hope that this will be our first Winterreise, not our only Winterreise, and we hope even more that our friendship will grow and change and nurture us both for a long time to come.  But we don’t know.  It is a stretch to say that we’ve enjoyed the tough times this week, but we have let the cold under our soles keep our feet moving, and we have let ourselves wonder, just as our traveler does, just as we all do, how long can this go on? How long can we go on, as last week’s quote from Agnes de Mille said, taking “leap after leap in the dark.”

The idea that this Winter’s journey was perhaps more than literally one season was first suggested to me by pianist Byron Knutson, who contributed other ideas earlier in this process.  Byron thinks that the journey is actually an entire lifetime of the traveler.  And I have come to feel that there is more to be found in the poems when looking at it this way.  Whatever its length, it is the journey of a lifetime.  It encompasses all passions, all questionings, all desires, and all renunciations that come with living, loving and dying.  But at no point in the songs do we know exactly where our traveler is on the journey, whether beginning, middle or end, just as we ourselves don’t know.  How many times are we blindsided in life by something we thought we were through with, often kicking ourselves, saying, “I thought I was over that!”  Life turns out to be a lot less linear than we’d hoped, especially the grieving process.  It is common that a long time after the death of loved one, the person returns to memory, inspiring great longing, a longing that is fresh and strong.  And so it is with our traveler as we will see this week in Frühlingstraum.  We have added this song to the other two this week, and will also cover three songs next week, so that we will have discussed all of the songs before the performance, leaving the last week open for other reflections.

In “Rast” or "Rest," our traveler says that he found shelter for a time in a Köhler’s house.  As it was explained to me, a Köhler is someone who makes charcoal, the old fashioned way, by burning wood very, very slowly.  A Köhler in Schubert’s time would have lived on the edge of, or even in a forest for easy access to lumber.  This is the only shelter described in the whole cycle, the only time our traveler says explicitly that he is resting indoors.  And it seems significant that he does so in a position of relative isolation, not in town.  It even seems to me possible that he himself was a Köhler for a time.  But even in warmth and shelter, the pain of his limbs continues, and even in stillness he feels his heart’s pain.  Perhaps he is discovering that some pain cannot be eased, even by material comfort.  The music is delicate and careful, the way one would be when laying down, tired and injured after a long journey.  And there are windy, sensual, serpent like moments when the choppier quality gives way to some climbing appoggiaturas, leaning achingly on the next note, the melody insinuating itself just as pain and angst reenters the mind of the traveler, even in rest.

Frühlingstraum is one of the most heart breaking songs in the cycle, because the music so fully captures the sweetness of the happier times in love.  It also contains the starkest musical contrast, as our dreamer awakes to face the cold, dark morning.  After a time of tragedy, this is what happens as one adjusts to the new reality in fits and starts.  In dreaming, he returns to the previous time.  In waking, he remembers, “she is gone.” I believe that other than the mention of the Köhler’s house, this is the only time in the cycle our traveler seems to be indoors, seeing leaves against the window.  Perhaps the leaves are those thrown there in a storm.  He tries by closing his eyes to shut out what he knows to be true and return to the dream of spring. The last question stabs the heart.  When will he hold his love in his arms?  When will those dead leaves turn colorful again?  Not any time soon.

In “Die Krähe”, or “the Crow” Translation of Die Krähe our traveler gives us his opinion of where he is on his journey.  He tells the crow that has been following him that he will not go much longer on his walking stick.  It is hard to know in this song if our traveler is speaking with bitterness or irony, as he suggests that he hopes to find loyalty in this bird, which has flown above him since he left the town.  In the very first song, his companion was a moon shadow, and there is no doubt that he has taken comfort and gathered understanding along the way from all kinds of beings and energies, that of water, in particular.  The music of this song is regular and almost light.  I hear the traveler beginning to let go.  Yes, I think he is laughing at the bird, asking does it mean to have his carcass as booty?  But in the end, no, I don’t hear irony in the music.  Painful truth, the bird will follow him truly to his grave.