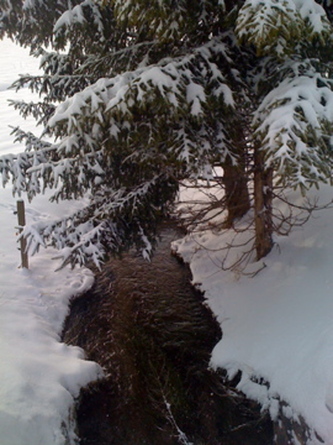 Through the Songs
A Twelve Week Journey With Schubert's Winterreise
Week Eleven: Getting There

"A sailor without a destination cannot hope for a favorable wind."

" The snow dusted my hair with white.
I thought I was already old
And it pleased me greatly."

There is a sort of unwritten rule of living abroad that calls on people, perhaps by virtue of the loneliness of being away from home, to be very open to making new friends.  People gather with almost complete strangers for Thanksgiving, meet each other on threadbare referrals, offer cups of coffee, meals, advice, logistical help, and simple human contact.  It feels akin to the ease that children have.  They meet, they say hi, they play.  And that is pretty much how it was for Catherine and me.  About a month after my arrival in Berlin last year, I took a Subway from where I was staying in the East all the way across the city to a neighborhood called Dahlem.  Berlin is a large city, and the ride took about an hour.  I went there to meet the sister of a friend of a friend.  “She plays piano.  You should call her.”  I had been told.  I didn’t know what to expect.  I didn’t know even what I wanted. In the cool, late afternoon light, I saw a petite woman, bundled up outside the old Dahlem train station- complete with thatched roof- waiting to meet me and take me to the Ethnological Museum for a cup of tea.  What she expected, or wanted, I don’t know any better than what I was hoping for.  But we found something.  Something that led us to the next step in our friendship, and the next, and the next, and eventually to this collaboration.  We have tried all along to keep open minds and follow our instincts, and hope for the best.  We are doing so this week, as any other, while also doing our best to address and conform to the very real, very specific performance demands of this music.  Our performance is just days away.

The most jarring turn of events we’ve been asked to accept during this process has been that almost an entire month of rehearsal, which represented about two thirds of our rehearsal time,  a period we’d counted on and looked forward to, was taken away.  It was a time we had envisioned as full of long talks, pots of tea, lazy perusings of Schubert biographies and slow, meticulous rehearsals evolving into dinner parties. That vision never saw the light of day.  On the very day Catherine returned from the states, I began hurried preparations for my first role here in Germany, learning, among other things, the word for filling in on short notice, “einspringen.”  Catherine, good friend that she is, was completely supportive of my making that my absolute priority.  I did, and the show went very well.  As I rode back on the almost seven hour train ride from Munich on Sunday, I slept and ate, and gazed at the beautiful Bavarian countryside, and eventually, slowly, gently, my feet propped up on my luggage, made my way back to the Winterreise score, which had been waiting patiently in my bag.    After a couple of illfated rehearsals on tired voice and frayed nerves, Catherine and I had our first complete run through yesterday (Wednesday) and it was rough, if not by any definition, at least by ours.  We seem to have found ourselves in a hurried, almost aggressive style of working on the music that I am more used to than she, but don’t necessarily like any better.  But we realize that just as we did not know what to expect from one another on that fall afternoon last year, we had no way of knowing what this process would bring out in each of us or what it would ask of us.  And we’ve continued to be curious about that, even as it seems disharmonious.  What it is bringing out in me this week looks almost ruthless compared to that more leisurely, open ended parallel reality that never came into being, and we often feel that we're hurting each other's feelings even though it’s the last thing we want to do.  Both of us have observed this sort of thing in classical music before.  It is what it is.  As much as we resist the idea, there’s something akin to a “right” way to do it, a standard one is trying to live up to.  It's just not essentially, no matter how you slice it,  an arena of total acceptance.   We thought maybe the nature of our friendship and the basic ease of the way the idea to collaborate came to us might give birth to a different way of working, an idea that Catherine has still not given up on.  But as we face the unanticipated reality of very limited rehearsal together, we’ve considered the possibility that the lost rehearsal time is the universe’s way of saying, as Catherine put it, that to channel great works is supposed  to be hard.  All we know for sure is that we care very deeply about one thing right now: making the music sing on Sunday.

After our shaggy run through, which was attended and kindly applauded by Catherine’s husband Hann-Jörg and pianist, Byron Knutson, who has offered support throughout this process, Catherine and I felt the fire under the feet that can only be offered by a poor rehearsal near a performance day.  There is nothing more motivating than the desire not to be lousy in front of people.  We each took a couple of hours to nurse our wounds, and then got down to perhaps our most productive session together so far, and the closest to our original vision.   We sat for four hours of what Byron calls “Kitchen Table” work.  Drinking cup after cup of tea, we looked at every measure of every song and asked each other, “what’s going on here?”  We found horses, and bells, and heart beats in the piano.  We found irony, resentment, and pleading in the poetry.  Catherine tapped on the small round wooden table in my kitchen, which she and Hann Jörg loaned to me when I found this apartment.  Her delicate fingers made the music come alive, and I sang and spoke bits and pieces with what was left of my voice.  Hour after hour, hypotheticals melted away and the songs as they will be between the two of us, emerged.  Today, we will hunker down each on our own and review, review, refine, and review in hopes of increasing the percentage of those ideas that we will be able to convey on Sunday.  “From page to stage,” as the saying goes.  Tomorrow, Friday, will be our second, and final complete runthrough.

This process of coming into something concrete, manifesting a real performance of this work, has at times been awkward, cumbersome and unskilled.  But we like to remind ourselves occasionally, that it is the nature of this particular work that it is difficult, for any singer, and for any pianist.  This cycle, depending on tempos, is about an hour and fifteen minutes of music.  That is almost double the amount of singing I have ever done in one stretch.  (Even the biggest opera roles have moments offstage, and when you add up the four hour evening, you come up well short of Winterreise, even in Wagner.  The demands of the piano part are enormous and while Catherine is an experienced pianist she is newer to accompanying, and is learning fast what it will take not only to play beautifully and expressively, but to keep things together and support the expressive choices I make in the moment.  In other words, this is challenging us both to the hilt.  But just as the traveler sings in “Der greise Kopf” that he is pleased to think that his hair has turned white, there is something in this painful, confusing collaboration that is aging me and maturing me, in a way I’m grateful for, and I think and hope that Catherine feels that way, too.  There is something lovely about really white grey hair, though it is not all that common to see someone with very long, white hair.  But Catherine’s long hair is beautifully white.  I remember the first time I saw her just over a year ago, I was struck by how beautiful it was.  And I think of all the possibilities open to us in that moment of our first meeting, including, I suppose, that we'd have nothing in common and never meet again.  Now, as the hours tick away, and I must get back to my studying(!) all possibilities fade away as one reality emerges.  All the questions between us are silenced as one answer struggles to make itself heard: Winterreise.

“Einsamkeit”  or “Loneliness”  Have you ever been in a really bad mood on a beautiful, sunny day?  It hurts, doesn’t it?  Or happily glum on a rainy day?  That is what this song is about.  The pain of our traveler trudging heavily through a day when the air is light.  No, he was not so miserable when the storm raged.  When he saw (as in Der stürmische Morgen) his own portrait painted in the stormy sky.

“Die Post” or “The Mail” This song is a conversation between a man and his own heart.  The expression, “the heart wants what it wants” may be true, but that doesn’t mean we don’t have to sit it down sometimes and explain that it can’t have it.  Questions and answers come rolling along in this song as the post arrives, by horse we think, as the piano clippety-clops along.  Hope has no logic as it springs in the man’s chest, for the Post is coming from the town where his beloved is, and the heart can’t help but want word of her.  The man asks the heart to see reason.  What would you do?  Do you want to look over there and see how it’s going? The horses’ hooves come to a halt and Posthorn stops ringing.  The final chords of the song are simple and decisive.  “Bumm bumm!”  “No thanks!”

“Der greise Kopf” or “The Grey Head” This song is very reflective.  It seems to be one of those moments, perhaps brought on by exhaustion, when one really wonders about the fundamentals of life and mortality.  Our traveler is pleased with a crown of white over his hair and surprised to see when it melts that his hair is still black.  If, as this song says, his hair has not turned white on this whole journey, then does that mean that the journey is, in fact, not the journey of an emtire lifetime, as we have been seeing it?  Maybe.  Or is it simply that this man has found, in letting go of wanting to be young, a freshness and vitality?  The music lets the man ask the question in his own way.  The accompaniment is simple and minimal.  It feels, not necessarily in any negative sense, existential.   It can also be read to mean that he is longing for death, and disappointed that he is yet young.  But even if there is longing, there does not seem to be angst. There is peace in the music.  There is resignation in the question, “How long is it to the grave?  How long is it to the grave?”

Next week:  Final thoughts and a return to Der Leiermann.