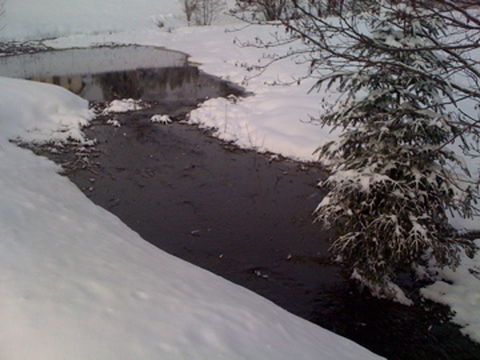 Through the Songs
A Twelve Week Journey With Schubert's Winterreise
Week Six: Flood Water and Illusion

The unstable nature of existence is cutting a wide swath through our consciousness this week as Catherine and I both come into contact with vivid reminders of the delicate balance in which life hangs.   It has been mentioned previously that for the first half of this twelve-week project, Catherine and I are toiling away with our Peters editions of the score on separate continents as she remains in California to be with a loved one who is ill.  In point of fact, it is Catherine’s sister who is ill with cancer, and this week Catherine has been by her side as she receives her third period of chemotherapy. Looking at the songs this week, Catherine had hoped that perhaps some of our journeyman’s pain would relent.  But as with her sister, for the moment at least, it seems that such relief is not to be.  Catherine says that the main feeling she is getting from her sister is that of endlessness - the light at the end of the tunnel is just too far away, too dim.  Just when she starts feeling a little better, it all starts again from the beginning.  For my part, I learned this week from afar that a member of my spiritual community back home was seriously injured in a cycling accident and is recovering with a traumatic brain injury.  In such contexts, day-to-day patterns of thought blush a different color.  Beliefs long held, even if hidden, are revealed as delusory.  For reasons of space, we will name just a few:  “Life is fair.”  “Things last forever.”  “We know what tomorrow will bring.”  So here we are, suddenly, in the middle of an awareness that is abundant in the poetry of this cycle, but somehow concealed from our quotidian minds.  It is the awareness that life is uneven, unpredictable, and impermanent.  Just as winter snow, our self-deceptive circumnavigation of these facts can only last so long.  Eventually it dissolves and we see it for what it is, illusion.

The first song this week is “Wasserflut” or “Floodwater.” I see what Catherine means.  In this song, the man’s pain continues, unrelenting. The wanderer is still very much caught in his agony, part of the waterway of emotion that is human suffering. Catherine sees him yearning to join the stream in its flow, if only in the form of his tears.  She thinks that perhaps we are still left unanswered when we ask:  will he achieve any relief?  I see another element present here that at least hints at a sort of distance or perspective, even if it does not offer immediate personal relief for our traveler.  When the man speaks directly to the snow upon which he cries, I see a vision of an embodied universe, one where snow has sentience and water has memory.  This is a moment when I continue to find hope in these poems.  How caring and tender is a universe in which a stream, containing tears fallen in heartbreak, has the ability to feel as it passes the beloved’s house, the heat of the passion that prompted the crying of those tears.

Of “Täusching” or “Illusion,” Catherine sees that the yearning for companionship seems to be tending dangerously towards insanity. Human companionship and the warmth of a town or a home are so distant yet so desperately desired.  The light in the dark, a kind of fata morgana, pulls him hither and thither, she says, mesmerizing him with the illusory hope of a warm soul within a bright home offering earthly happiness and comfort. And in a demented dance, to a piano part of incessant repeated notes (faster than in other songs), he gladly succumbs to that hope even as he seems to be conscious of it as illusion. Catherine thinks that sometimes the piano even seems to be that tantalizing light, dancing at the end of his every phrase.  Here, as last week in “Der Wegweiser”, we see him abiding on the border between insanity and spiritual awakening.  If, as in Hinduism, seeing the nature of illusion is the precursor to a lifting of the veil covering reality, then perhaps our traveler is close to that insight.  The final line of the poem, “only illusion lets me win” does seem to indicate that he is self-aware in this regard. It can also be seen in practical terms.  The illusion of the possibility of comfort up ahead may be all that gets him through the present moment.  Self-deception, in this case, may keep him going.  It could be a friend to him just as his faithful walking stick helped him to carry on in “Das Wirtshaus.”  Some days, reality is not all it’s cracked up to be.  If the alternative is despair, or a level of despondency that may lead to a complete lack of will to survive, than illusion may be the best solution.

Perhaps music itself is just such a helpful form illusion, allowing us to follow the light of its friendly dance, even as we trudge through the snowy pathways of our lives.  It always deepens my appreciation of a piece that has survived for many generations to contemplate that over its history, one can be sure that the work has been performed and appreciated in times of difficult circumstances for both performer and audience. Certainly that is true of Winterreise.  Some say that in the 1942 recording made by Hans Hotter in Berlin, you can hear the sound of the Allied bombs going off in the background.  Personally, I couldn’t discern the rumbles and squeaks of a less than optimally maintained piano from whatever other noise exists on the recording. But I will say that the intense emotion and spontaneity I hear in Hotter’s voice seems to me considerably greater than in his later, 1954 performance with Gerald Moore, a recording I also quite love.  But is that emotion actually present or is a result of my imaginative projection of the circumstances?  That such overlays exist is a truth of the experience of musical endeavor.  These songs change in the listening as they do in the performing.  Such kaleidoscopic experiences of a single work seem to prove the old adage “the only thing constant is change.”  I am even tempted to purport that perhaps that is, above all, what this cycle is about. Change.  One synonym for changeable is “vagrant.”  This traveler, by the nature of his vagrancy is showing us the commutative nature of our own circumstances.   One can take this as cause for despair or as an opportunity to hold precious the people and circumstances we currently enjoy.  It can also give us more cause to return decisively to those things which we find to be touchstones of comfort, as music has been for so many of us, even if as we do so, the flood waters carry away our present tears and it all reveals itself to be nothing but illusion.