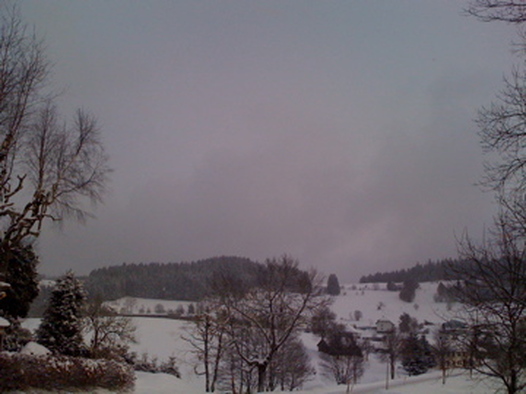 “My heart sees in heaven its own image painted.” from “the Stormy Morning"

There is a bird perched atop an antenna on the roof of the building opposite me.  It stands, fluttering in the wind, it’s wings tucked back.  It preens a bit and looks around, continually checking its balance.  It may fly away in a minute.  Yes, there it goes.  There is something in the immediacy of the bird’s connection with its circumstances and the directness in its efforts to improve its situation that is easy to identify with. Poets of Müller’s day (later to be called romantics) saw themselves in the air, earth, water and sky, and they saw the air, earth and water and sky within themselves. Reacting in part to the dominance of reason and intellect that preceded them during the so-called Age of Enlightenment, they returned their gaze to nature and the vision of an embodied, unified world.   They rejected the idea of a mechanistic explanation for everything.  They found wisdom beyond reason, and understanding beyond thought by appreciating and identifying with the beauty, sensuality, hardship and cruelty of nature.  And in their connection to the natural world, these poets found expression for an idealistic impulse.

Romanticism and political protest are cut from the same cloth.   The beginnings of romanticism coincide with the a time of revolution, including the French and American revolutions.  This revolutionary energy is the same set of wishes, thoughts, feelings and yearnings that lead that bird to go find a different spot.  It is a hope for and a movement toward something perceived to be somehow better than our current state, whether personal or political, individual or collective.  I see something of this natural, self-affirming instinct in current events.   Amazing things are happening back home in California.  I cannot believe the pictures I am seeing of Oakland.  Streams of people are flowing through downtown.  Whether you agree with the politics or opinions of those protesting, this movement certainly demonstrates that the idealistic impulse is alive and well. This impulse is a human drive to move in the direction we believe will return our lives to the fundamental truths and connections that most nourish us.

For Catherine this autumn, that has meant spending time in California with her family as her sister undergoes chemotherapy for cancer.  Last week, Catherine shared some of the difficult feelings of relentlessness of her sister’s treatment.  This week she begins to see some movement and healing, brought on by water. Once again, we follow this winter’s journey along with our own lives and find many landmarks we can recognize.

Auf dem Fluß came right in time for Catherine’s trip with her sister to some natural hot springs in California.  She says that her sister kept talking about how wonderful it was to hear water: the gushing of a stream down the hill outside their room, the streams feeding the baths, the pools themselves, water bubbling up from deep inside the earth, heated by the earth's core, water streaming down cold from icy springs. Catherine found that in the midst of all this natural life, she and her sisters are finding connections, both old and new, that she knows will continue when they part.  (Catherine returns to Berlin this week.) In nature, she says, we find the way back to our own cores and the foundations of our relationships. And this is what the Romantic poets were looking for as they emerged out of a time of rationality and intellect.  It is a reconnection to something that had been neglected, to an inner place.  For this reconnection, nature was their teacher and guide. In this song there is still the icy barrier, the "Rinde", but underneath it, one feels life.  In the piano part it can be heard in the 32nd notes as a pulsating, and aliveness that cannot be held back forever. In our relationships too, barriers can too easily be built up, hiding the love and the connection that is still there, only waiting for spring, for the melting. Catherine has felt a lot of melting going on between her and her sisters, as they deal with one of them being ill - and she says it's been moving and it's been good.

I was so happy to hear that Catherine had this experience this week, and that the natural springs seemed to offer her sister comfort.   And I love in this song the way the traveler sees the extremes of nature, and finds himself in those elements.  It is that lack of separation from nature that gives such hope of fundamental wholeness even in the face of harsh conditions. “My heart, in this stream.  Do you now recognize your image?”  For our traveler, he sees his image in the winter.  He sees the coldness, iciness, harshness, bitterness and he sees his heart torn asunder as the sky is torn asunder by the storm.  He sees himself reflected in the world, and it gives him a sense of belonging.  He may be alone, but he has the whole sky to mirror him and give his experience substance.   Catherine and I both felt Der Stürmische Morgen (The Stormy Morning) connected somehow to the protests in the states by the Occupy movement.  The movement to truth can be an inward or an outward journey and in some ways, I see our wanderer as a protestor.  He stands up to the powers that be- the wind, the snow, all the elements, and even the heavens themselves- in the most fundamental way.  He says to them that he belongs. “My heart is nothing but winter.”  Separation doesn’t exist. He is as important as anything else.  And here we really see how this period of poetry takes bold strides and says “I!” He loves that it is storming.  Just like his heart.  Just like his torment.  “That’s what I call a morning. Quite to my taste!”

Rather than trying to completely understand the idealistic impulse, it might be easier to feel around the edges of the moment that precedes it, the shadow before that impulse to connect, express, act, sing, move, and speak.  Isn’t there always something there, lacking? Isn’t there a darkness, a loss, an uncomfortable stasis?  Getting right down to it, what was the pre-romantic state of consciousness that gave birth to this entire cycle of poems and the movement they belong to?  Following conventional wisdom, it was some sort of desire to correct the course of human development, which seemed to veer too far toward the intellectual.  And what better way to balance rational thought, perhaps the only thing that separates humans from other beings,  than with immediate, sensual experience? “you who energetically murmur,” our traveler speaks directly to the river, defying reason which would separate them, It is a cry and a question to the natural world, and he answers, too, his own cry, “my heart in this stream!”

As a musician, I first heard of a man named Kurzweil because I knew people who used his synthesizers, but his name came up in conversation with friends today regarding his involvement with a theory called “Singularity.” This is a theory, I learned today,  that predicts that some time this century, an intelligence beyond human beings, utilizing technology will emerge.  In essence, we will transcend our biology.  There is a movement toward the idea of more and more intimate, human connected computers.  People wear them in their ears, after all.  But the idea that artificial intelligence will provide greater wisdom for humanity reminds me of the idea that artificial foods would provide greater nutrition, and I can’t help but feel that this is a very harmful direction for human beings to go.  I think, as both songs this week and Catherine's trip to the hot springs illustrate, it is the power of healing through connection with the natural world, its reflection of the divine and the divine within us, that will lead to transcendence.  And the encouraging thing about that idea is that that is something available to us at any moment, no matter where we are.  Even sitting in an apartment in the middle of a big city, you can look out the window and see a bird standing, facing the wind, and immediately be reminded of what is important.