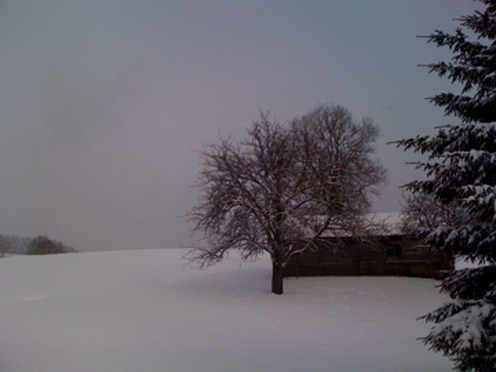 Through the Songs
A Twelve Week Journey With Schubert's Winterreise
Week Nine: Keeping to the Form

“Living is a form of not being sure, not knowing what next or how. The moment you know how, you begin to die a little. The artist never entirely knows. We guess. We may be wrong, but we take leap after leap in the dark.”

There is something to be said for keeping to the form.  In moments of darkness and uncertainty, moments of clouded perceptions and faltering intentions, what do you have?  You have just the bare outline of what you know to be true.  You have the form of your life.  Those are moments when sticking to the form can carry your through.  You don’t have to know, you just have to do. This week, with challenges mounting for both Catherine and me, this is what we need to do.  We need to focus on the music and on the basic spiritual teachings we find to be of use at times like these.  We need to practice.  We need to stick to the form. As a result, our writing may be less personal than other weeks.  We did say at the beginning of this project that no performance stands abstracted from the people doing the performing, but we also do think that there is a certain point in being a classical musician when the performer drops away.  It isn’t that it becomes about Schubert (or Müller) entirely, and it certainly isn’t about Lisa or Catherine any more. Something else emerges that we are all in the service of.  And in listening to that energy, that entity even, certain parts of the self, usually those that are obstacles to expression, begin of necessity, to drop away.  Bits of insecurity, ego, stubbornness and fear, come up and there’s a clear moment when one can choose:  do I listen to the fear, or do I listen to the song?  It is similar to the process of sitting meditation.  In holding the form of sitting quietly for a period of time, focusing on the breath going in and out, everything that is not sitting quietly, watching the breath go in and out, reveals itself.  Thoughts, worries, physical tensions dance actively before your mind’s eye.  Just as with the music, there’s a moment where one chooses: do I follow this train of thought that has jumped in front of me, or do I return my attention to the breath?  That’s why meditation is called mindfulness training.  One is training the mind where to put its attention.  So this week, although there are still echoes of last week’s “freak out” phase, and various things affecting our preparations, Catherine and I don’t want to talk about that.  We want to keep our attention as concentrated on the songs and their meaning as possible.  We want to keep to the form.

A friend commented last week that this blog is “a Buddhist take on Schubert” which, as you can see, is fair enough. This week we will make my friend’s statement a bit more true, and cull spiritual teachings directly from the songs.   Another friend recently enjoyed the art exhibit Dali meets of Vermeer, which is showing at the Mauritshuis museum in the Hague.  In the exhibit, classic paintings were placed next to paintings of more modern artists for direct comparison.  This caused me to remember a Picasso exhibit I once attended that placed the works of the great artist next to artwork of indigenous peoples. This exhibit received quite a bit of criticism as being unfair both to Picasso and to the cultures from which the artworks were drawn.  Some critics did not believe, for example that Picasso had been directly influenced in the way the exhibit implied, while others felt it to be a denigration of the sacredness of the intention of the people who made the objects, many of which were made for religious purposes. Putting things side by side for comparison may not be an entirely neutral, or even a fair thing to do.  Maybe it is oversimplifying to look at these poems and compare them to Buddhist teachings. We certainly do not intend to state or imply that Schubert or Müller had the Sūtras directly in mind when they were creating this work. But the connection between 19 century German Philosophy and Eastern philosophical and religious thought is well known. (See Post Script.) And we find it interesting and inspiring that sometimes beautiful works of art, music, painting, and literature, do seem to come from the same well spring as the great spiritual teachings of humanity.  Spiritual teachings, whether of Buddhism, Christianity or other religions, have survived for thousands of years and are sustained for the same reason that a song cycle like Die Winterreise remains meaningful to people today.  They contain basic truths that resonate with all of us.  Things that we know, deeply, and yet hunger to be reminded of.  From that perspective, of course there would be overlap.  So this week, we’ll put the songs and the teachings side by side, and let you see what resonates for you in each.

"Will ‘o the Wisp" and the law of Impermanence. In Buddhism, there are considered to be three factors, or characteristics, of existence.  They are Suffering, Impermanence, and Not-self (or insubstantiality.)  Simply put, life hurts, things change, and then you die.  It may sound depressing, but recognizing these three characteristics as true can help lead to less pain, since suffering can be derived from attachment to things that do not exist, or over attachment to things which are not substantial, that is clinging to things that don’t last. Impermanence (the Pāli word is “Anicca.”) seems to be the theme of this song, and it does seem to offer comfort to our traveler. Suffering can also come from believing that one’s pain will last forever, which even though it often feels that way, isn’t really so.  Previously, our traveler wondered how he could ever go on.  How he could possibly let go of his beloved, what it would be like when there was no trace of her, how she could have deceived him so.  He was often caught in worrisome reverie.  In this song, what is to come “does not weigh heavily on his senses.”  Here, he is observing the natural world, the dry mountain streams, and seeing the nature of things.  He is following his path, and he is sure that it will do what the water has done.  “Every stream leads to the ocean, every suffering has its grave.”

"Last Hope" and the teachings on Attachment. Buddhist teachings on the subject of attachment, or clinging, (the word is Upādāna in Pāli or Sanskrit) state that this grasping is the source of all suffering.  Not some of it.  All of it.  There are four forms of attachment.  Attachment to sensual desires, attachment to opinions, attachment to rites and rituals, and attachment to the idea of self.  Release attachment to these, and you will be free from suffering.  Of course, life is not so all or nothing.  I’ve heard it said, “If you let go a little, you will have a little happiness. If you let go a lot, you will have a lot of happiness. And if you let go completely...” well, you get the idea.  In this song, our traveler is aware that when he pins his hopes on a colorful leaf in a tree, he trembles as the leaf trembles, and when the leaf falls to the ground, so do his hopes.  I continue to see opposites in these song titles, for in calling this song “Last Hope” it seems to contain less despair than the name implies. He said in the first song that he must find his own way.  Perhaps here he is beginning to find it.  He is not rushing past his angst, as in Rückblick.  He is not making tracks just to get away from something.  In this song, he stops and stares at the leaf.  He feels his trembling.  He watches his hope die. Perhaps this is the last time our traveler will pin his hopes on something so changeable as a colorful leaf. Labels like “attachment” and “impermanence” are not necessary to understand what is happening here.

Whatever IS will be WAS.

P.S.  19th Century German Philophy bows to the Buddha:  J. G. Herder (1744-1803) was a contemporary of Goethe and a central figure in the literary movement that predated this cycle, and the first to translate some of Bhagavadgita from Sanskrit into German.  In his work On the Language and Wisdom of the Indians he wrote “In India, the human mind acquired its first form of wisdom and virtue, with a depth, strength and sublimity which…has no equal in our cold, European philosophical world.”  Arthur Schopenhauer, a contemporary of Schubert’s, though he lived a much longer life than the composer, is well known for his philosophy's commonalities with Buddhism, namely, that liberation arises from the refutation of desires.  Johann Gottlieb Fichte, a follower of Emmanuel Kant and a leading philosopher in the German Idealism movement, covered all the same ground as fundamental Buddhist teachings, such as the nature of consciousness and self-awareness.  His work An Attempt at a Critique of All Revelation had content on morality that was at odds with Christian orthodoxy of the time, but may have resonated well with followers of the Buddhist Eightfold Path.  All this is to say that while it may be a superimposition of our own interests to find so much connection between Buddhist thought and Müller’s poetry, we do not think the allusion is an “Irrlicht” or Will o’ the Wisp.  Immanuel Kant’s Critique of Pure Reasonwas published in 1781, and proposes repeatedly that knowledge arises experientially, that is, is not separate from the experience of the knower.  Here, for fun, is a hypothesis from that text.  Sounds a lot like the law of impermanence to us:)

“That all phenomena in the succession of time are only changes, that is, a successive being and non-being of the determinations of substance, which is permanent; consequently that a being of substance itself which follows on the non-being thereof, or a non-being of substance which follows on the being thereof, in other words, that the origin or extinction of substance itself, is impossible- all this has been fully established in treating of the foregoing principle. This principle might have been expressed as follows: "All alteration (succession) of phenomena is merely change"; for the changes of substance are not origin or extinction, because the conception of change presupposes the same subject as existing with two opposite determinations, and consequently as permanent. After this premonition, we shall proceed to the proof.”