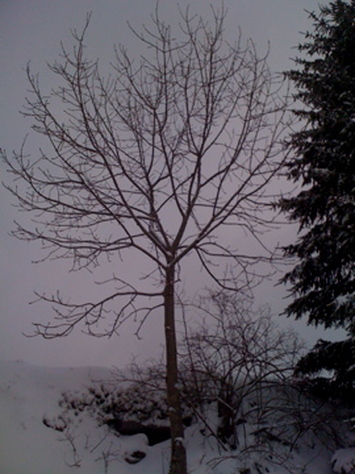 Through the Songs
A Twelve Week Journey With Schubert's Winterreise
Week Five: No Turning Back

“Every day a little death” or so goes a lyric from Stephen Sondheim.  Every day, a part of us is dying.  With every decision we make, a possibility disappears.  With every path we take, another road is left abandoned.  But is it these small, daily deaths that are spoken of in Schubert’s Winterreise? Or is it the larger, more literal idea of suicide that perplexes and lures this character as he travels through snow, ice, heartbreak and longing?  The idea of suicide was strongly present in the collective psyche of Central Europe at the time these poems and this music were written.  Johann Wolfgang von Goethe’s “The Sorrows of Young Werther” was published in 1774 and then republished in 1787, roughly thirty years before these poems.  It is a story of a young man driven by a certain type of personal, spiritual angst to take his own life.  It was not only popular; it was the literary embodiment of a cultural sentiment of the time in which the suffering of the individual became paramount and essential to express.  The novel actually inspired fashion trends among young men and is said to have been the impetus for a rash of suicides similar to that in the story.  This “Werther Fever” may have cooled down to a degree by the time Müller wrote his poems, but the story’s impact on the cultural consciousness of the early nineteenth century and Goethe's on impact the Romantic Movement that followed, (including Schubert’s greatest musical influence, Beethoven) would all be difficult to overstate.

Catherine thinks that perhaps Der Lindenbaum is a song of such longing, that the comfort spoken of in the shade of the tree is none other than the comfort of escape offered through death. There are others who have interpreted the song in that manner, suggesting that the reason the man flees past the tree so quickly, not even turning back to pick up his hat which has flown from his head, is that he is trying desperately to resist this the idea that he should, in fact, hang himself from the tree. I first experienced this song as a simple, comforting moment of possible refuge for the man.  It is such a lovely melody and it is easy to catch one’s self humming it contentedly without thinking of it in any ominous sense.  This song is extremely well known here in Germany, but  folk melody of its kind has a dark history, separate from both its pretty melody and negative poetic allusions.  Songs of this sort were used systematically as part of the Nazi educational campaigns geared at cohesion. Catherine tells me that among people of her generation, born shortly after the war, there is to this day a lingering distaste among Germans for German folk music.  So, whatever pain or angst may be present inherently in the text, there is forever now also a later shadow falling on the song.   I see some of the darkness that Catherine is speaking of in the text, even if I don’t feel it as a literal ode to “Selbstmord” a word that is not spoken in the entire cycle, however many suicidal undertones and possibilities there may be.

This returns us to a continuing source of inquiry.  Are the events, locations and dilemmas depicted in this journey meant to be taken literally?  In the case of this song, are we even speaking of a literal tree? Today, while working with Byron (pianist Byron Knudsen, who was mentioned in a previous week's entry) put forth the idea that perhaps the tree is symbolic of society.  That the shelter offered in the song is that of a familiar community, and that the man not returning to the comfort of the tree represents the character’s setting out on a different path, away from this protection.  Whether literal or metaphoric, I see it as an important crossroads for the man.  It is one of those points in life where a decision must be made, and it will impact one forever.

Last week, in “the Inn”, we saw a moment when the man forged on, having been heartlessly turned away from shelter.  But there are other kinds of forging onward that may seem unlikely but also are essential for moving one forward in life.  Along with moments when the harsh realities of life forceus along, aren’t there, too, these moments when the gentle sweet voice of the past speaks up after a long quiet and says, “Just come back.  Come back towards me.” In Buddhist teachings, the character Mara appears in many forms.  He appears to tempt Buddha from the spiritual path and may even appear as a beautiful young woman there to seduce or please. And the Bible says “And no marvel; for Satan himself is transformed into an angel of light.”  That is the way I see Der Lindenbaum, as a wolf in sheep’s clothing.  Yes, the man carries beautiful memories of times happily in love, carving his name in the tree.  But to stay there, once he has been rejected and outcast would surely lead to misery, however comforting its familiarity might appear to be.  How many of us know the special, grinding heartbreak of trying to go back and revive a relationship when it is simply not possible to do?

I also see this song as a reflection of a sort of no man’s land the character inhabits frequently throughout the cycle.  The first thing we heard of him in the very first song is that he is a stranger, but at various points there are references that suggest he has a sense of place and belonging. In this song we know, for instance, that he has been here long enough to dream many sweet dreams under the shade of the tree.  He has carved in its bark repeatedly, and been held under its protection during both joy and suffering.  Byron feels strongly that there is enough intimation over the course of the songs to suggest that the man has lived a full, engaged life among people, even perhaps that he at one point had a child and a family.  I think it is certainly clear that he is not a wandering ascetic and outcast, wholly unconcerned with the worries of love and relationship.  If anything, he is mostly quite caught in them, sometimes even tortured by them, as we’ll continue to see as we look at these poems.  But both this song and even more so the other song we will discuss this week, The Signpost, offer strong examples of a different sort of experience.  The central theme of these songs is the  moment when one takes a solitary path, a path of renunciation.

In “Der Wegweiser”, or “the Sign Post,” he states plainly that he is not meant to follow the path that other people take, saying that he must “travel a road from which no one has returned.”  This makes M. Scott Peck’s “The Road Less Traveled” sound like a populous freeway.  He does not completely answer the question of “why” he must do this, except to say that it is a “foolish craving.” But he does tell us “why not.”  It is not because he has committed a crime and should hide from men. And it is not because he is lost or doesn’t have alternatives.  There are many signposts pointing to cities.  Even if he labels it a foolish compulsion, I see it as a choice, albeit one he does not yet fully understand.  That is why I see this song as an important turning point in his understanding.  It seems to me  a turning point of faith.  Is that not the essence of the spiritual traveler? Someone who makes the choice to take that chance, even not knowing why? Making the choice to let go, and step towards a road or a place that has no signpost, with no assurances of how, or even if, one will return?

Catherine sees the song as a descent into insanity.  With one note pounding away, it is ceaseless, "unerbittlich" the German would say.  It is unrelenting, unforgiving, inexorable. But then as the song modulates into major, he rights himself somewhat and things seem a little more normal.  At that moment, he is not going crazy but just pleading with fate or, better said, complaining.  He is just asking something we all wonder every day.  Namely, what did I do to deserve this particular path?  And asking also of the hardness we experience in life, isn’t there some easier way?  But then the song goes back to this terrible standstill.  The street from which no one returns is nothing other than insanity.

Once again, Catherine and my ideas seem quite far apart until we look at the two carefully together.  Especially if you see the poems as an exploration that is both literal and figurative, there is room for both.  After all, insanity or psychosis can be just this side of a spiritual breakthrough.  It is only as old notions of reality are shattered that an awakening is possible.  But in this cycle, unless perhaps you agree with some of our previous thoughts on the final song, the breakthrough is never completed.  The story travels across, and between the borders of life and death, past and future, clarity and insanity.  This song, and the cycle as a whole, hover on the "Kippe" - the edge. That edge exists for all of us as the inherent uncertainty of aliveness, whether in gross or subtle form. From this place, which feels to me like a paradoxical resting point of instability, the man in this story could go just about anywhere.