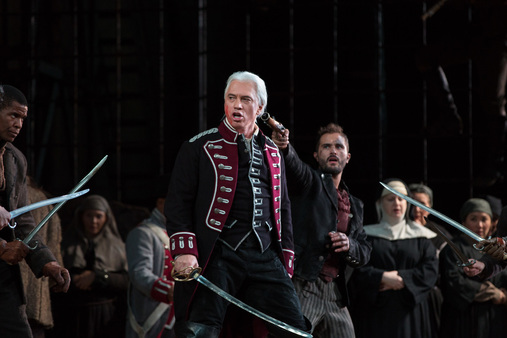 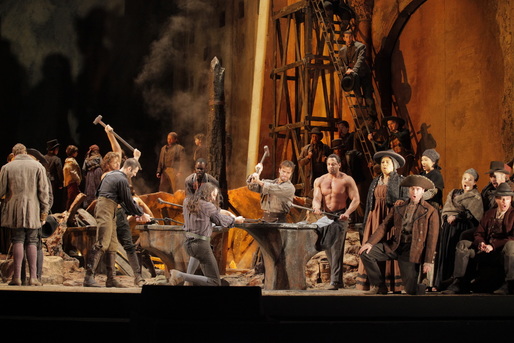 If you’re looking for a simple plot, look elsewhere. Even among opera plots— known for mistaken identities, missed connections and violent convolutions— Giuseppe Verdi’s Il trovatore is a complicated mess. And nobody minds, because it is also a delight. Tunefulness of the highest degree. Catchy, fast-moving music threads its way through the tragic story of a woman’s revenge backfiring. Yes, it is tragic, but tragic in an it’s-their-own-fault-so-we-can-enjoy-their-misery kind of way. Written during what some call Verdi’s second period, Il trovatore is a first cousin to Rigoletto and La traviata, a trio of operas guaranteed to keep the most leaden toe tapping.

As for Trovatore, the streets are strewn with the bodies of better writers than I who have tried and failed to explain what the heck is going on here. I’ll leave at this: The Count is in love with a woman, but she loves someone else, having fallen hard for a musician, as women are wont to do. The musician is the son of a gypsy, (or is he?) who once threw the Count’s brother on the fire (or did she?) The beautiful woman pretends to give herself to the Count to save her beloved Troubador, but really drinks poison from her ring instead, (she is so not into him.) In the end, the troubador and his mother will go to live peacefully in the mountains, at least they might do, if this were a comedy, which unless you count the absurdity of the storyline, it is not.

For a trovatoran wine, I’d be looking for something that really makes a splash, befitting an opera that was a hit from its premier in 1853, and has not fallen out of the repertoire since. Italian would be a logical choice, or perhaps Spanish. The play on which the libretto is based, El trovador, 1836, is the work of Spaniard Antonio Garcia Gutiérrez. The setting is fifteenth century Aragon.

A story that revolves around a gypsy whose mother was burned at the stake needs a wine with some fire, or at least ash. A gypsy wine, perhaps, to honor Azucena’s central role. (Verdi’s only reservation about giving the premier to Rome was his opinion that the company lacked a suitable Azucena.) But we must also have some of Leonora’s nobility, and a dash of our Trovatore’s pathos. A dark flavor for our sinister Count may pass by, but not stick around. And for the opera that gave us the Anvil Chorus, the wine must have metal. 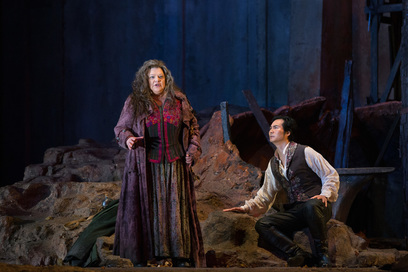 Dolora Zajick as Azucena and Yonghoon Lee as Manrico in Verdi's Il Trovatore. Photo Marty Sohl/Metropolitan Opera.
Verdi’s mother passed away not long before he composed this opera, and he cited her death as cause for his delay in composing. The final act’s Ai nostri monti is a mother-son duet of unparalleled beauty. As he had done in Rigoletto, and would do again in Traviata, Verdi gave the most beautiful duet to characters separated by a generation, rather than to the young lovers. In Ai nostri monti, Azucena and our Manrico (the trovatore) sing of an imagined refuge, and this inclines me to think that a mountain wine would be preferred. The pinnacle aria, sung by Leonora outside the prison gates as her beloved languishes inside, d’amor sull’ali rose makes one think that a touch of rose would be welcome.

As said, simplicity isn’t in the program, and a diverse parade of strong flavors would certainly fit the bill. This wine needn’t be perfect, and it can be more fun than convincing. After all, if we’re willing to accept that someone threw the wrong baby on the fire in an act of revenge, we’re ready to believe just about anything.
L.H. 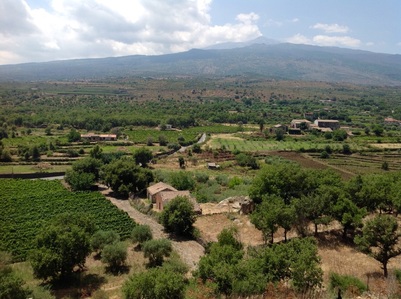 MHM:
Fire and brimstone, mountains and metal. We need a volcano, here, and an active one, so it’s off to Sicily we go, to Mount Etna on the island’s eastern flank. Etna is the largest volcano on the European mainland, and it daily sports a frisky plume of bleachy smoke and, every few years, spectacularly blows its top. Active defines this place. During the day the Mediterranean sun warms the rock while breezes keep things cool. By night the thin air chills down while land re-radiates the day’s heat in a long exhale. 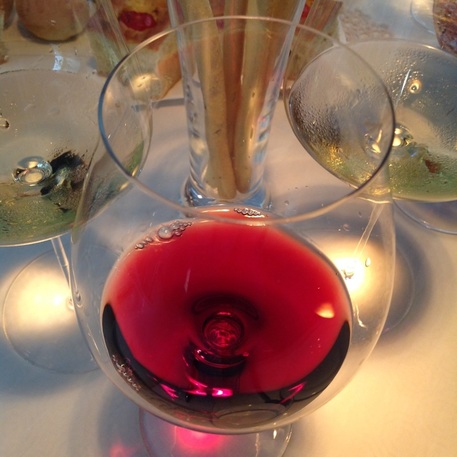 Photo Meg Houston Maker
Etna’s massive cone is ringed with terraced vineyards up to 1,200 meters elevation (nosebleed-inducing, viticulturally), and the vines are threaded into soils black with Vulcan minerals.

This is the land of Nerello Mascalese, a red grape native to this terrain and therefore perfectly suited to it. It recently became a darling in the U.S. after sommeliers woke up to its charms, and although the wine label will say, simply, “Etna Rosso,” that’s a too-humble moniker for such a complicated beast. The wine mingles daring with finesse: There is acid. There are flowers. There’s an earthy iron core wound tight with herbs and wind and almost-blood. There’s a gritty snap of minerals at the finish. The best Nerello Mascalese are un-obscured by flavors of barrel toast and other cellar tinkerings, so that what resolves in the mind is the taste of the mountain itself.

It’s a trovatoran wine—not poisonous, thankfully—but a wine that appeals to both gypsies and nobles, and suggests happier days on the mountain.