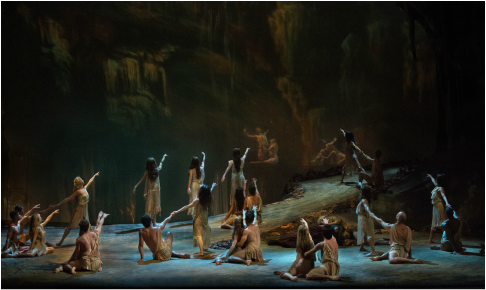 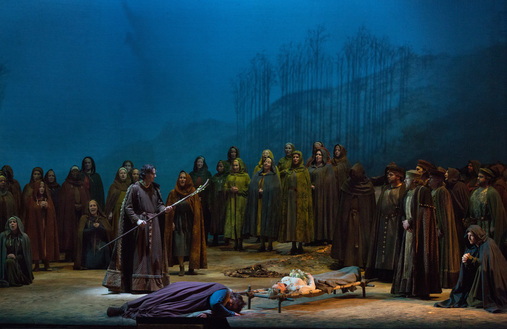 There is a lithograph of Richard Wagner that depicts the composer’s hair as the feathers of a black swan. Atop the swan sits a naked woman languorously draping her arm through the bird’s neck. Beneath the composer’s head, wrapped by a Napoleonic arm, is King Ludwig II, Wagner’s great patron, the rightly-nicknamed “Mad King.” Lurking behind the composer is a creepy little man who bears a suspicious resemblance to the artist, Michael Matthias Prechtl. It is a wacky, disjointed portrait that would be at home alongside a Monty Python Poster, or perhaps Hieronymus Bosch’s Garden of Earthly Delights. (View Prechtl Lithograph)

It is tempting to consider Tannhäuser and the Singers’ Contest at Wartburg as something of a mad mélange such as this portrait. We have Venus, presiding over a liberated realm of sensual pleasure complete with Bacchanal. We have the great minstrel knights purveying their love songs for the nobility. We have earnest pilgrims, progressing. Granted, it is a bit of a mash up.

But maybe this is just a pro-Catholic morality tale, as some accused Wagner of creating at the time. A Faust story, à la Goethe, or the story of Tom Rakewell in A Rake’s Progress.  (Paintings by Hogarth, opera by Stravinsky.)

No. Looking at the work with hindsight, in the context of the composer’s entire oeuvre, we can see that Wagner was up to something else entirely. It’s 1843 and he is already deep into exploring the possibility that romantic love has the capacity to lead to spiritual elevation.
Our plot: Tannhäuser is one of the great singers of the day, a Minnesinger who pens poems and songs about love. Prone to overindulgence, as singers so often are, Tannhäuser is hanging out on a mountain known as Venusberg. After a year, the thrill is gone. In the midst of a decent-sized cabal with Venus, he invokes the name of the Virgin Mary, which acts as a get-out-of-jail-free card. Leaving Venusberg, he makes his way back home and meets up with his buddy Wolfram, also a singer. (Historically, Wolfram von Eschenbach was the author of the song of Parsifal, which Wagner took as inspiration for his final masterpiece of that name, for those of you keeping score at home.)

Wolfram encourages Tannhäuser to compete in Wartburg, and further shows himself to be a selfless guy by stepping back to allow Tannhäuser to make some time with the chaste Elisabeth, with whom Wolfram is also in love. But Tannhäuser blows it by revealing that he spent time in Venusberg. 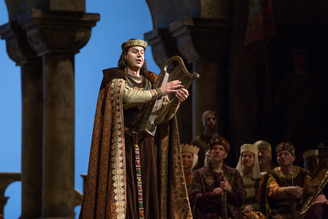 Peter Mattei as Wolfram in Wagner's Tannhäuser. Photo by Marty Sohl/Metropolitan Opera.
For a Tannhäuserisch wine, I’d like a rosé. Wagner, as usual, wrote the libretto complete with stage instructions for his opera, and he specified that the opening scene in Venusberg be “bathed in a rosy light.”

The role of Venus was sung in the premier in Dresden in 1845 by Wilhelmine Schröder-Devrient. (Say that three times fast.) It was an earlier performance of hers that had inspired a young Wagner to take up composing in the first place (or so he claimed when he went to her with his hand out for a loan.) Schröder-Devrient sang Venus at the end of her career, while the role of the virginal Elisabeth was played by Wagner’s nineteen-year-old niece, Joanna. Schröder-Devrient was also embroiled in a scandal around the time of the premier, and as the production went on the singers developed a good, old-fashioned feud. Since we have an innocent virgin/lustful woman polarity going on both onstage and off, let’s have a wine with some ups and downs.

Speaking of ups and downs, the locales in the opera are threefold. We’ve got two hills: Venusberg and Wartburg. And we’ve got the valley in between. An argument could be made for hill or valley, but for a winery, certainly something with history, of stolid tradition and old-school glamour in its architecture would resonate with the great singing contest that takes place in Schloss Wartburg, a castle you can still visit today, and which gives rise to Elisabeth’s flashy opening Act II aria, “Dich teure Halle!” You rich hall!

More about the music: If the opening melody of Tannhäuser does not grab you from the first, you must run immediately to the nearest apothecary and get one of those kits for removing earwax. It is this stately, solemnly-joyous procession of pilgrims that begins the opera and runs through it, hinting at the practice of recurring motifs that would dominate Wagner’s work soon, and forever after. Also, in Act II, the grand march accompanying the arrival of the guests is resplendent with melody. So I want a wine that takes hold of me and does not let go.

Other musical highlights we might draw on for our flavor profile include Elisabeth’s humble prayer and Tannhäuser’s lengthy, trouble-filled Rome Narration. But my (and many people’s) favorite moment in the piece is Wolfram’s O du mein holder Abendstern, which makes pudding of anybody with a weakness for a marvelous baritone. This opera has way too much gravitas for a sparkling wine, but let’s have a wine that shimmers like the evening star in this aria, one of the most beloved in the repertoire.

Regarding region, let’s exclude French wines. Paris was synonymous with catastrophe for Wagner, despite the facts that the Tannhäuser we enjoy today is known as the “Paris version,” and, the idea for Tannhäuser first came to Wagner while he was there. (Tannhäuser’s aborted run in Paris is one of music’s great disaster stories.)

Thuringia, the region that hosts our story, is sometimes called “the green heart of Germany” because of its famous forests. Whether from Thuringia or not, we need some green notes here because—rounding off our plot summary—after the virtuous Elisabeth fades away and our hero Tannhäuser has returned to the rosy light of Venusberg, the Pope’s staff sprouts green after all!

So let us have one final blast of purity and freshness, as the last note on this varied, yet integrated wine. 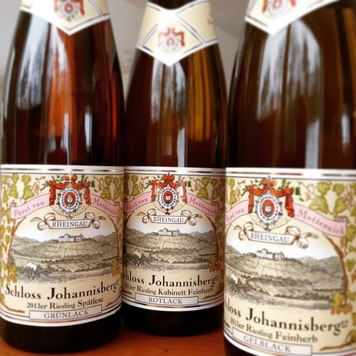 A German wine seems natural here, given the composer’s provenance, and a German Riesling seems particularly apt given the grape’s many faces. Riesling is a scintillant and luscious white wine, often ripe with tropical fruits and acidity that pierce like high notes. But the fruit never dominates, at least in well-made versions, because this grape tends to be a tuning fork for terroir, for the soil in which it’s grown.

The Rieslings of Schloss Johannisberg could be a fit. First, there is a mountain: Johannisberg, literally “John’s Mountain,” is a vertiginous pitch of Rhine riverbank named for St. John the Baptist. There is also history: The terraces have been in vine since at least 817. There is a castle: The Schloss itself, built by Benedictine monks in 1130 as a monastery, and purchased in the eighteenth century by Konstantin von Buttlar, Prince-Abbot of the Fulda district. It was bombed out during WWII, then restored to full glory. It’s still privately owned.

Riesling has been grown at Schloss Johannisberg from the get-go, and has become so closely intertwined with this place that California winery E. & J. Gallo once dubbed their American version “Johannisberg Riesling” to lend it legitimacy (if not authenticity).

Schloss Johannisberg also pretty much invented late harvest Riesling (by accident; long story), and those sweet styles, classified as Kabinett or Spätlese, are concentrated and sugary but with abundant countervailing acid that prevents fatigue. It’s a shimmery, glistening, golden elixir, silky like that romantic baritone. (You can read a few Schloss Johannisberg tasting notes on Maker’s Table.)
Yet maybe German Riesling isn’t quite right for us. We’re missing the green, and while it can have some green touches—lime, herbs, green tea—its persona mostly hangs on a kind of wet-rocks oiliness that some tasters (particularly British tasters) refer to as “petrol” and others call “diesel” or “petrichor.” Riesling’s essence is minerally and grounded, earthy, and we might need a little more delicacy, here. Plus, Riesling isn’t pink.

So I’m looking at Austria now, and at that country’s dominant grape, Grüner Veltliner. It’s green by name (“grüner”), but it tastes green, too, suggesting flavors of green citrus peel, laurel, lemongrass, young walnut skin. Its body even has a green-gold cast, lit with glints of grassy flame. Grüner and Riesling share a mineral-acid sensibility, but the Austrians always vinify Grüner dry. It’s a wine that feels cooling, almost cold. 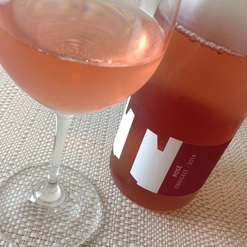 Photo: Meg Houston Maker
But perhaps Grüner is a little too green, too grassy and steely for all of these conflicting passions. And what about that halo of rosy light?

Let’s find a rosé to love at last. It must have freshness and purity, elegance and refinement, but also that bit of earthiness (not too much), and a whiff of mountain air. We must retain the sense of history and gravitas, and yet it must be silky, too. Plus, let’s try to stay in Austria. That’s a lot to ask.

Tegernseerhof to the rescue. The estate, situated in Dürnstein on the banks of the Danube, has been owned by the Mittelbach family for five generations. Like Schloss Johannesburg, it, too, was built by Benedictines, in 1176.

Fortuitously, the Mittelbachs grow both Riesling and Grüner there, in steep riverside vineyards whose stony soils imbue the wines with the charms of their terroir. But they also farm Zweigelt, a spicy, black-skinned Austrian grape that makes a zesty rosé. Their Mittelbach Tegernseerhof Zweigelt Rosé is an elegant shell pink color, and they bottle it in a tall, clear flute or “hock” wrapped with a clever label that’s shaped like a capital-T.

The wine at first seems demure, with flowers and spice and blooming red berries that balance the grape’s keen acidity, and there’s a finishing note of spearmint. But it also has a curious, nearly Rabelaisian earthiness that grounds it and seems to make it matter more. It’s a wine that somehow feels both pink and green, light and dark, woodsy and refined. In other words, a wine that fits our story to a “T”. 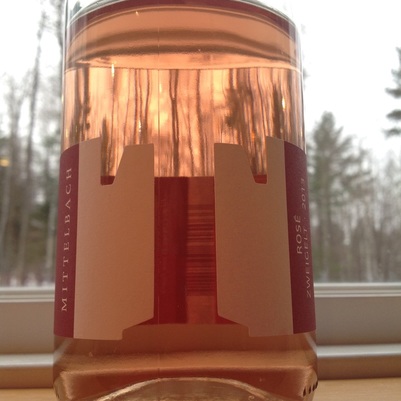 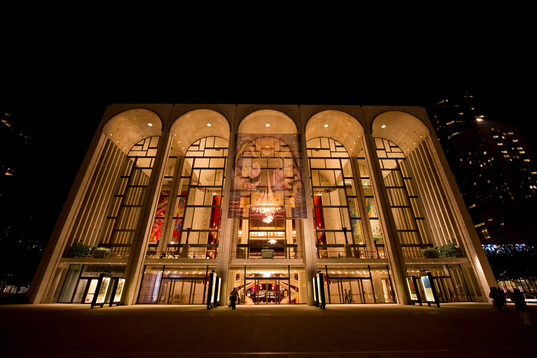